Anything From the Weekend Boot Sales?

Apart from the 2 pots of growing tulips and the tiny succulent for the plant stand (which were on Monday's post) there were a few other finds,.......thankfully nothing as expensive as the decorative plates or water-butt from the week before! 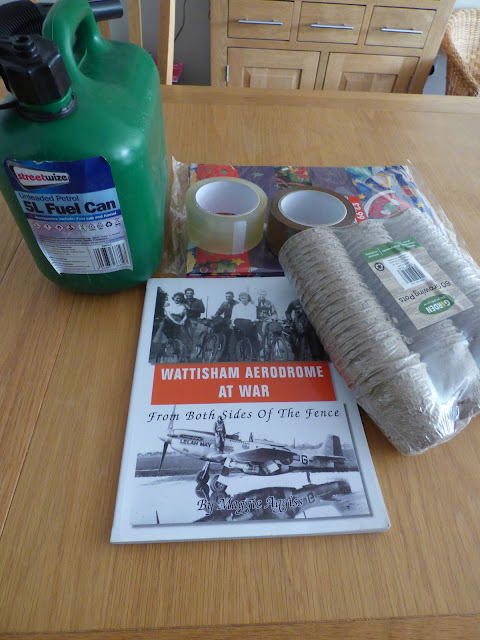 The peat pots are for next year - and probably the year after - for sweetcorn sowing. They were only 50p which is a handy find - this year I got a pack of 24 from QD and they were £1.99p.
Christmas wrapping paper from the house clearance people was £1 as was the book about Wattisham Aerodrome - which joined the village where my Grandad had his farm and where my Dad lived during the war.... I wondered if there were any photos of them in the book.
The man with the rolls of tape is at every boot sale and I used nearly the last of my parcel tape when  sending the books off to Ziffit last month - he charges 75p each. The new 5L fuel-can replaces the one which went to Brother-in-Law's when we cleared the workshop at Clay Cottage. It had some old diesel in it which he said he could use in his old dumper/log splitter. When we had the problems getting fuel last month I asked him if he'd emptied it but he said it was probably still at the farm where they cut wood and he doubted he'd be able to find it. Now for £2.50 I shall be ready for the next shortage!...... .........although diesel doesn't store well so I'll need to use it and refill now and again.
I also found the cheap Sage plant I'd been looking for from my list (rather than £2.50 on the plant stalls at Needham Market) for 50p and they had Lemon Balm too which I've planted in my wild weedy shingly garden/path bit down the side of the house. It won't matter if it spreads and goes mad there and birds love it when it runs to seed. I'm glad I didn't fork out £2,000 to have a the path redone - I'm embracing the random things popping up there! (tomorrows post!) Even the weeds.
Back Tomorrow
Sue
Posted by Sue in Suffolk at 06:00
Email ThisBlogThis!Share to TwitterShare to FacebookShare to Pinterest
Labels: Car Boot Bargains